The ancient city of Petra is one of Jordan’s national treasures and by far its best known tourist attraction.
Petra is the legacy of the Nabataeans, an industrious Arab people who settled in southern Jordan more than 2,000 years ago. Admired then for its refined culture, massive architecture and ingenious complex of dams and water channels, Petra is a UNESCO World Heritages Site and one of the new Seven Wonders of the World. Inhabited by the Nabateans, Edomites and Romans, Petra brought together the knowledge and skill of these civilizations to create this world wonder. Caravans laden with incense, silks, spices and other exotic goods would rest at Petra. 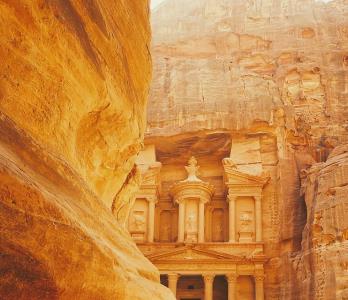